Thanks for willing to be interviewed!

1.      Since this is book two in a series (and I’ve heard those can be tricky books to write) what was the one thing you wanted to accomplish in Son of Truth?

My goal with each book I write is to leave a piece of the story inside the reader; that the reader will resonate with one of the characters or plot lines. Son of Truth explores the issues of how does a person change after a spiritual encounter? What happens to one’s faith when God doesn’t come through? Why does God allow bad things to happen? If my readers walks away with the story still brewing inside their mind, I feel like I’ve accomplished what I set out to do.

2.      Which novel has been the easiest for you to write? Daughter of Light or Son of Truth?

Son of Truth was by far easier. Daughter of Light went through many rough drafts and rewrites as I was learning the craft of writing. When I wrote Son of Truth, I was able to focus more on the story and less on learning how to write. I also knew the characters and plot, so writing Son of Truth was merely continuing the story.

3.      When writing sci-fi/fantasy, what are some constraints you come up against, if any?

The reaction of people. Really J. For the longest time I hid what I wrote because some of the people I knew viewed fantasy and science fiction as wrong. Of course, now everyone knows what I write. But people can still be hesitant to pick up my book because they think it will be “too weird”; that it will be filled with elves and dwarves and dragons and stuff. They think they won’t be able to relate to my book. Getting past people’s prohibitions is the biggest hurdle I have. But when I do, I have readers coming up to me saying they never read fantasy, but they loved my book. And that makes my day!

4.      You have a lot of great characters: Rowen, Lore, Caleb, and Nierne. Is there any specific inspiration for any of them? Or did they just unfold as the story was told?

Every story I write begins with an image of a character. I look at them and ask: “Who are you?” “Where do you come from?” “How did you end up here?” When I first met Rowen, I saw her in the field with the wolves attacking (a scene from Daughter of Light). When I first met Caleb, he was assassinating a man (another scene from Daughter of Light). Lore morphed from a very hard, cold man, to the Captain of the Guard. And I met Nierne in the dungeon after her city was taken over.

As you can see, I met each character and started asking them those questions and the story began to unfold as they revealed who they were and what happened to them.

Book 3 will be a book of revelations. Many of the questions I have planted throughout the series will be answered, like what happened to the Eldaran race? Who are the Shadonae? Where did Caleb’s mother come from? Why couldn’t Rowen’s father stop the Shadonae?

Relationships will develop and the fate of the country of Kerre will be revealed. Rowen will meet the Shadonae and the final confrontation will happen. One thing I will say is there will be no family revelations. No Star Wars “I am your father” kind of moments J. 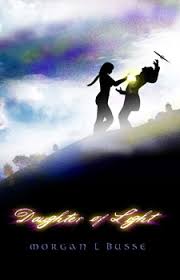