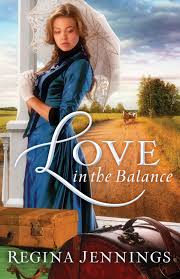 Molly Lovelace dreams of being a society leader in 1879 Lockhart, Texas, but being smitten with handsome wrangler Bailey Garner doesn’t seem the quickest route. If only he would settle down so he could support a family.

Bailey imagines doing great things for God, but his greatest obstacle is Molly. As long as he thought they’d be married, he excused their stolen kisses, but when she keeps refusing, he vows to earn her love. In town, he tries his hand at several different trades, but everywhere he turns he runs into the mysterious stranger Edward Pierrepont. No surprise that Molly’s always making calf eyes at the wealthy adventurer.

As pressure from Molly’s parents grows she is forced into a hasty decision. Had she weighed all her options and will she find love in the balance?

This book presented a different take to the romance novel because it already starts with the heroine in love with someone. I found it to be an interesting way to begin a novel and I was curious as to where it was going. When I figured it out, I wasn’t completely thrilled, but the writing is such that you want to turn the pages. Character-wise I just loved Bailey, faults and all. Personally, I never really considered him to have any. The guy was just human. And he was easy to like, fun to read about, and I thought a character who was fairly rock steady. Molly, on the other hand, was hard to read. She probably makes the most growth in this novel and really, the author did a fabulous job with her development, but the choices she made often irritated me. I realize they had to be made in order to hone in on the point of this novel, but it wasn’t quite what I like to read. Spiritually, I love the theme of redemption and forgiveness which was beautifully done in this book. This was a unique book and really not a bad novel, it just wasn’t my cup of tea.

**I received this novel from Netgalley. My opinion was not affected in any way.**