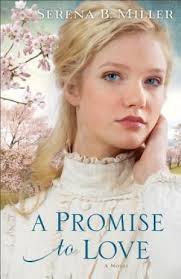 About
Ingrid Larsen, a young Swedish immigrant, arrives in Michigan in 1871 to search for her brother who has disappeared into the woods to work the dangerous lumber camps. Destitute and barely hanging on to hope, she encounters a newly-widowed farmer who is struggling to raise five children on his own. Marriage would solve both of their problems, and so Ingrid proposes to a man she barely knows. She will fight to protect her new family–but the hardest battle of all will be winning the heart of her new husband.

Review
Don’t be fooled by the cover! This book is not so cutesy it doesn’t have substance. The premise behind the novel is one that has been done been many times before, but Ms. Miller does a fantastic job of breathing life into the old thing. I love Ingrid’s gumption throughout the novel. She was doing many things, but she wasn’t throwing pity parties even though she had a right to. Joshua was a great hero because he was so human (although when he made mistakes, he made some really bad ones). The novel pulls you in and is so hard to put down. Spiritually, Ingrid learns to do everything as unto the Lord, and to stop trying to please man while Joshua has to learn to trust God even though he has experienced so much hardship. Great Novel. Highly Recommended!