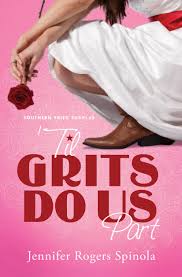 About
Shiloh Jacobs is planning her wedding without family, without money, and without a clue—and trying to make a go of small-town Southern life. Until she stumbles on an unsolved case about a missing woman that makes her run in the opposite direction—right into the would-be killer’s web of plans. In the midst of sorting through her tragic past and strained relationships, Shiloh finds herself on the run from a madman—and hoping she can make it to her wedding alive.

Review
It was nice to return to Staunton, Virginia again. I think that this novel took me a minute or two to get into, but that’s most likely because the first few chapters were reviewing what happened in the previous novels. Ms. Spinola threw a mystery in the novel that was captivating and interesting…I kept trying to guess who done it! But the best parts of the novel, in my honest romantic opinion, were between Adam and Shiloh. Spiritually, Shiloh has to learn to forgive herself and move past her past. Though there were moments where I had to suspend my disbelief, this was overall a good novel. Recommended.

**I recieved this novel from Netgalley. My opinion was not affected in any way**