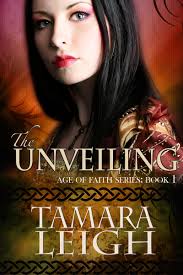 12TH CENTURY ENGLAND: TWO MEN VIE FOR THE THRONE: KING STEPHEN THE USURPER AND YOUNG DUKE HENRY THE RIGHTFUL HEIR. AMID CIVIL AND PRIVATE WARS, ALLIANCES ARE FORGED, LOYALTIES ARE BETRAYED, FAMILIES ARE DIVIDED, AND MARRIAGES ARE MADE. For four years, Lady Annyn Bretanne has trained at arms with one end in mind—to avenge her brother’s murder as God has not deemed it worthy to do. Disguised as a squire, she sets off to exact revenge on a man known only by his surname, Wulfrith. But when she holds his fate in her hands, her will wavers and her heart whispers that her enemy may not be an enemy after all. Baron Wulfrith, renowned trainer of knights, allows no women within his walls for the distraction they breed. What he never expects is that the impetuous young man sent to train under him is a woman who seeks his death—nor that her unveiling will test his faith and distract the warrior from his purpose.
Review
When I saw what this book was about I inwardly groaned. It’s a little bizarre to me when women dress like men and somehow the hero falls in love with them. But still, since Ms. Leigh wrote it, I read it. And I liked it. A lot. It was better than the usual. I don’t want to give anything away, but the heroine had a good reason to dress like a man, and I never got that impression that the hero was falling for her while he thought she was a man. The book picked me up and swept me away to 12th century England and I didn’t want to leave. I’m excited that it’s a series.
Spiritually, Annyn feels that God does not answer prayers and rejects Him. But God slowly woos Annyn back and its well worth the wait. Wulfrith already has an established relationship with God that is so deep it affects everyone around him and usually has a way of making them better. Just how we should be. Highly Recommended!

8 thoughts on “Tamara Leigh’s The Unveiling”